Just because you are a little damaged doesn’t mean life is over.

Happy 2020 to everyone from Japan! We are in our New Year’s holidays now.  I came back to update my blog constantly again!

Today I want to show you my recent kintsugi work.

This one is a bottom of my Dresden teacher, Alfredo’s hand-painted piece which was broken by the earthquake in 2018. 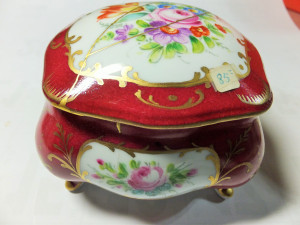 I bought these pieces at Gojyozaka porcelain festival last summer to fix them. When I bought them, they were broken pieces, and I got them very cheap.

The porcelain is called Kiyomizuyaki in Japanese, and the perfect ones are expensive. 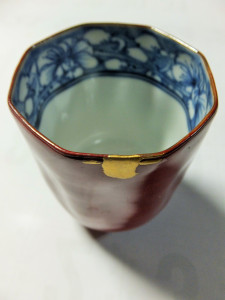 The last one is an antique. I got this at an antique shop in Kyoto.

I think I am luck to live close to Kyoto because the city is a porcelain city, and I can get lots of broken pieces for my kintsugi work.

A couple of weeks ago, I finished my first gintsugi work. Gintsugi is…

This is going to be very quick. I am having internet problems which may continue for a while. Otherwise things are going along reasonably.

I had plans! But life is what happens while you are making other plans…

All the best to everyone for the New Year.

I hope to see everyone next year.

I’m sorry to say the bird didn’t survive. The people at the rehabilitation center think he was hit by a car.

Thanks to everyone for good wishes and positive comments.

I know, I know. There has been a deathly silence in this little corner of cyberspace. My drafts folder is littered with half-written posts. No major changes – life just keeps happening while I make other plans. And my energy levels are zilch. Who says older people need less sleep?

Today was supposed to be a day off. Yes. At around 9:30 this morning I get a call that our vehicle has been found. She was stolen around a year ago. She was insured, we were paid out, but not enough to get another double-cab pick-up. We ended up with a second-hand (‘pre-loved’ – yeaaah) mini-hatchback.

So, not our vehicle, but they wanted us to go and identify her and make a statement. Which we duly did. She looks to be in running order, but what amused my warped sense of humour is that she had an alarm installed. She had originally been supplied with only an immobilizer – obviously less than successful.

The engine number and VIN (Vehicle Identification Number) had been removed, but she had Microdot technology which showed the original VIN. Pity the Microdots (clearly marked label on the windscreen) didn’t dissuade them from stealing the damn thing in the first place.

We finally get home, late for lunch. Open the door, cat saunters out and starts hassling a bird. Forcibly remove cat. The bird turned out to be a swift. It looked confused, if anything. No visible injuries. I often just put wild birds in a quite place and give them a chance to recover. Very often they perk up after a while and can be released.

This one didn’t. They are insectivorous, so I couldn’t give it seed or anything similar. I start phoning around – I know when I’m out of my depth. Was referred to “Fallen Feathers”. In case you are interested, swifts have soft beaks and can be given a small ball of raw mince. If you can get the beak open. Yes.

Point number one, it was around six o’clock at night. I have no mince.

Point number two. I can open a pigeon’s beak, but they’re much bigger! And no soft beak. From out of my depth I have gone to needing a snorkel. The address is more than 35 km away. I’m not great at night driving. Not all of the street lights are working and the road marking are faint.

I did manage to get there and back in one piece. I hope the bird makes it, although I will admit I am not hopeful.

Ndlovu Youth Choir are in the Finals!

Posted on September 7, 2019 by notewords

Those who read my rather irregular ramblings might remember some posts about the Ndlovu Youth Choir. They went viral with a version of The Shape of You (Ed Sheeran) and did a fabulous version of our national anthem in the Anthem Project. Now they are taking America by storm in America’s Got Talent.

And they are in the finals!

With our little cottage is starting to feel more like home, we decided that the time had come to plan a day trip to get to see a little more of this part of England, especially with my course commencing in less than two weeks. The RSN had advised that some of their collection pieces […]

The cockatiel is much better, pretty much back to his old self. He whistles to go out, but the weather is getting cooler and I don’t want him to get sick again. He’s no youngster.

I was hoping to get a video of him singing ‘Jan Pierewiet’, but he spots the phone immediately and hides behind his slice of brown bread, peering out suspiciously. I was hoping he would become an internet sensation – Cranky Cockatiel, more famous than Grumpy Cat. Maybe next time.

It’s such a pity that so few of my students are willing to sing. I don’t know if it’s just a local thing, but most of them won’t open their mouths. Singing has fallen away at the schools, which may be part of the problem. We used to sing everything from nursery rhymes to folk songs and whatever was a hit at the time. Also so often people laugh at a child’s first attempts to sing. It takes practice, okay! It’s not surprising that many don’t try again.

In my last post I mentioned the Anthem Project. The South African Anthem is something of a patchwork. Five languages (Afrikaans‚ English‚ Xhosa‚ Zulu and Sesotho) and two different tunes. There is a clear change in the middle when it shifts from one to the other and changes key as well.

The first tune is a hymn, previously banned as it was used as an act of defiance by the ‘revolutionaries’. The second is parts of the original anthem in English and Afrikaans. And remember Afrikaans was the language of the oppressors. Yet it is in there. Musical unity indeed. We sometimes forget how far we have come, problems or not.

They are judging the finalists at the moment. Here are links to a couple of my favourites.

One of the finalists – Wonderful voices!

And the last finalist.

We have elections today.