What with one thing and another, the garden was pretty much ignored over the last few months.

We have been attacking it spasmodically. My husband gets tired, also I don’t think sunburn on a healing skin graft is a good thing. But he gets upset if I go ahead and do it. Some progress has been made. 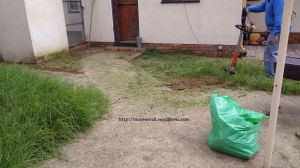 I’m expecting to find an outbuilding or two we may have overlooked.

I’ve been doing some crocheting recently. I’d forgotten how fast it is, certainly compared with knitting and tatting is not even in the same postal code. I made a couple of shawls in a couple of weeks, and I wasn’t even pushing it. Not an intricate pattern, but a stitch I love, Solomon’s Knot. Also known as the Lover’s Knot and (damned if I know why) Hailstone. 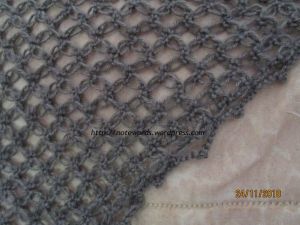 This was a gift. I made myself one as well.

There is a metallic thread through this one, although it doesn’t show up well in the photo. Don’t look at the dates which show how long ago I did them….

Here is the odd story for anyone who is interested.

I saw a mark on my son’s left shoulder that I thought could be dangerous. He can be less than cooperative with doctors and such. He has spent a lot of time in hospitals and sometimes refuses outright to be hauled off for whatever. So I made an appointment for all three of us for a ‘routine health check-up’. We went to the Dermatologist and there was no mark on my son’s shoulder… The Dermatologist, however, took one look at an innocuous (to me) brown mark next to my husband’s eye that I can find in photos going back ten years. The rest is history.

I have no explanation for the mark I was convinced I saw. I can still see it clearly in my mind’s eye. All I can suggest is that it was a vivid dream. I very rarely remember my dreams. There was one lucid dream (where you know you are dreaming and can actually control what is happening) that I had when I was still in school, and can still remember. Another dream was of my parents, some time after they had passed away. I remember saying in the dream ‘I know it’s a dream, but it’s so nice to see you’.

I’m never been one who has ‘feelings’ or ‘forebodings’ or anything like that.

So there it is, for what it’s worth.

6 Responses to In the Jungle…