Some may recognize this as the title of a song by Lulu. (Released in 1968 – yes, I’m showing my age) This is Titch, enjoying the last of the long grass before it is cut.

My husband has been working on getting the grass under control. He was busy this morning when we spotted Titch doing her Fierce Jungle Predator impression. He smiled and softly sang ‘I’m a tiger, I’m a tiger’. He doesn’t smile often – it’s part of the Parkinson’s package. I laughed. It was an instant of crystal clear communication, and such a poignant moment. If you haven’t dealt with dementia, it can be hard to understand just how difficult communication can be. He struggles to find words, slurs and mumbles as well. He pursues his own line of thought, and then comes out with something that I can’t follow because I have no context.

We went up to the neurologist on Monday. One of the major freeways across Johannesburg is closed so I had to find another route. This was less successful than I hoped… At least we got there in one piece. Much swearing, I got hooted at a few times (I’m surprised it wasn’t more) and I rode over a traffic island. Look, I was watching the traffic, trying to read road signs and keep an eye on the GPS. I ran out of eyes. We were also late for the first time ever.

My husband has been having more problems lately, struggling to find the right keys, sometimes putting seed in the birds’ water dishes. He doesn’t know what year it is and misspells his own name. All the specialist would say was that his movement is not worse (how he walks, stiffness in his hands), but that the other problems are ‘the progression of the disease’. That’s not a happy phrase. He has been put onto an extra medication to help his memory. We will see.

We go to painting class once a week. it was suggested as therapy and he enjoys it. He produces some interesting work too – very much in his own style. Our teacher was talking about copyright a while ago (and emailed us copies of magazine articles to illustrate her point. Irony rules…) He would never have to worry about copyright, what he produces is so completely different from the reference image. Here is one of his paintings. 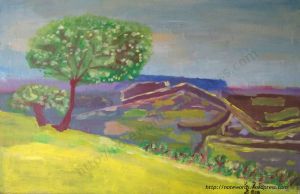 We have a coffee break in the middle of class. The other week conversation wandered onto dementia and out came all the stupid old jokes about confused elderly people with one woman saying if she developed it she would swallow a handful of pills. I sat there wanting to disembowel someone with one of the teaspoons. What do you do? I’m perfectly capable of creating a massive scene and have a great line in sarcastic comebacks. But it would embarrass my husband and undoubtedly spoil his enjoyment of the class. 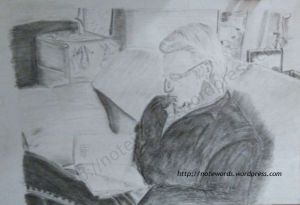 A drawing of my husband dozing over a book. Not very clear, I’m afraid. My husband refuses to go without me and I’ve got to do something. Apart from disemboweling fantasies.