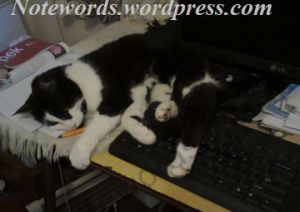 My writing is still going steadily. Despite Titch’s efforts to the contrary. 😀

Just putting one word after the other.

Not that I don’t have bad days, and even on a good day I often end up with less words than I started with. A lot of the writing advice I see says you shouldn’t edit as you go, but that’s the way I’ve always done it – even when I wrote in longhand.

Something else weird. I’m playing music, much more than usual. My left hand gives me a lot of pain, so I can’t play the more difficult guitar pieces, but I’ve been playing keyboard – which doesn’t hurt, funnily enough. Probably because I’m not at the same level.

I’m thinking that for me there is a strong connection between music and writing. When I was having some success writing a number of years ago (Some magazine articles and stories published, and my book) I was also still going to my guitar teacher in Johannesburg and obviously playing a lot of new music. It’s not a connection I’ve made before.

As a teacher, I play to demonstrate, and that’s never stopped, but working on something new and playing for pleasure seems to be what makes the difference.

A number of other writers I’ve known were also creative in other ways. A friend of mine teaches dance. Her pupils do very well – she always says she doesn’t take any pupil whose mother wants to dance… She has had a number of books published locally.

Another member of our (now defunct) writing group also painted.

Handwork, on the other hand (sorry, couldn’t resist that) works better for me as a calming down and relaxing time. If I’ve had the sort of day when I want to bite pieces out of the furniture, watching TV – particularly a movie I’ve watched before and particularly enjoy – and tatting or knitting for an hour or so can calm me right down.